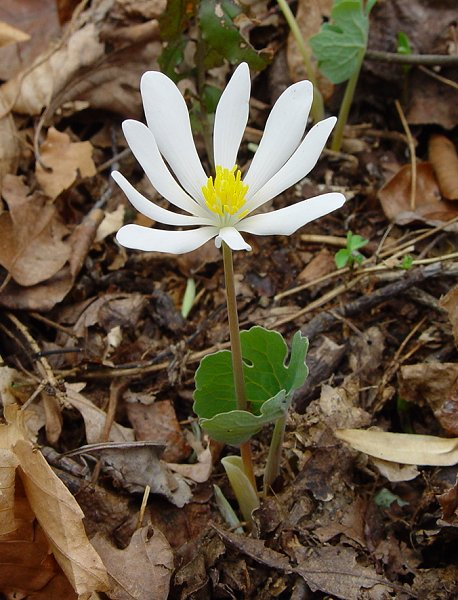 The homeopathic remedy Sanguinaria Canadensis is made from the Blood Root plant. The fresh root is used. Native Americans took bloodroot to induce therapeutic vomiting, and used the orange-colored juice of the root as a body paint and clothing dye.

People who respond best to Sanguinaria are confused and full of dread, and feel very weak and stupid. Despite feeling heavy, languid, and drowsy, they cannot sleep at night and the slightest noise wakes them up. An uncomfortable sensation of prickling warmth sometimes spreads over the whole body.

The classic symptom picture for this remedy is irritation of the mucous membranes, particularly those of the respiratory system. Sanguinaria may be given for hay fever accompanied by great sensitivity to grass, flowers, and scents. Other conditions that are typically associated with Sanguinaria include asthma with catarrh and raw, burning membranes.

This herb contains a powerful alkaloid called sanguinarin, which can cause nausea and vomiting, and burning pains in the stomach. It is fatal in large doses. The burning quality of the plant is of most significance in the homeopathic remedy. Sanguinaria is used for respiratory problems, such as asthma, bronchitis, inflammation of the pharynx (which is between the tonsils and the larynx), and nasal or laryngeal polyps. The first symptoms include dryness, rawness, and burning in the mucous membranes, and later phlegm. The remedy is also given for indigestion, coughs that are typically dry and spasmodic, for example, after whooping cough or flu, and hay fever with burning and dryness in the nose and throat. A key symptom of all these ailments is a burning chest pain that extends to the right shoulder; it may make it difficult to raise the arm.
Sanguinaria is also used for rheumatism in the right shoulder, menopausal hot flashes, and throbbing headaches and migraines that settle over the right eye.