Posion Oak is found only in the following states which are California, Neveda, Oregon and Washington.

Poison Sumac also has a wide distribution. It is found in Texas, Minnesota, Wisconsin, Illinois, Louisiana, Kentucky, Tennessee and the rest of the eastern US states. 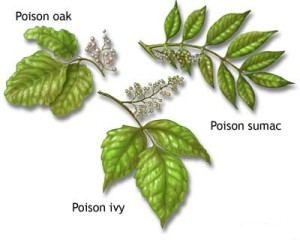 If you accidently touched a poison ivy plant, wash your hands with soap and water immediately. If a rash starts to develop, use Poison Ivy Lotion on the rash. The lotion will help stop the itch and prevent infection. Poison Ivy Pills should also be taken at a general interval to get rid of the rash. Pills should be taken every hour or two during the initial start of the rash. As the rash subsides decrease the usage to every 3 or 4 hours. As the rash starts to go away you can decrease the dosage even more.

Poison Ivy pills can also be taken before you get poison ivy. The pills help to give you a little more immunity if you do touch poison ivy. The rash may be milder if these pills are taken.