I am seeing quite a bit of posts by skeptics attacking homeopaths in Haiti.  A group of homeopaths belonging to the group called Homeopaths without borders went to Haiti in February to help the Haitian population.  One scientist called this group Quackery Without Scruples.  Another scientist called Homeopathy will hurt people in Haiti.  They say homeopaths giving medical advise instead of doctors will hurt the Haitian people.  Another skeptic was criticizing the group because they had to travel to the Dominican Republic before reaching Haiti.  He said this group was so mismanaged that they could not even travel to the Haiti airport.

Being critical of homeopathy is a person's right to do.  This practice is not proved or disproved in large medical trials.  However, I think it is just despicable to say homeopaths are going to Haiti with the purpose to harm people with their quackery or they are mismanaging resources that people have given them to help the people of Haiti.

The lead homeopath for homeopaths without borders is a medical emergency room doctor.  Dr. Nancy Eos has 30 years of plus experience with emergency room care.  Her group never dealt with serious injuries or amputees.  The group set up two tents beside the clinic.  They had treated 2000 patients in 3 days.  The homeopaths were treating the walking and wounded.  The homeopaths were well received. No one has complained about their homeopathic treatment to date.  The hospital staff and the people of Haiti were very receptive to the team of homeopaths.  They treated things ranging from burns, physical trauma and injuries, fear, dizziness, headaches, urinary tract infections, eye problems and dehydration.

Below is the picture of Haiti outside the medical clinic. 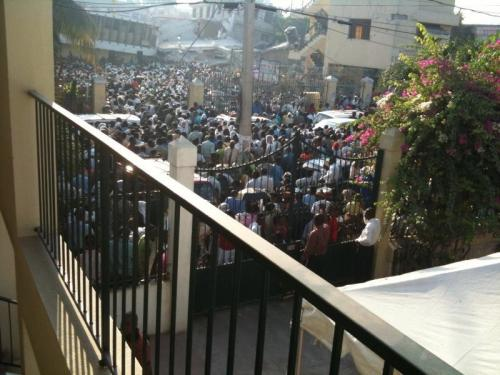 Other trips are planned to Haiti.  A free homeopathy clinic is in the process of being setup to help the people of Haiti.  An update on the March mission will be put up shortly.